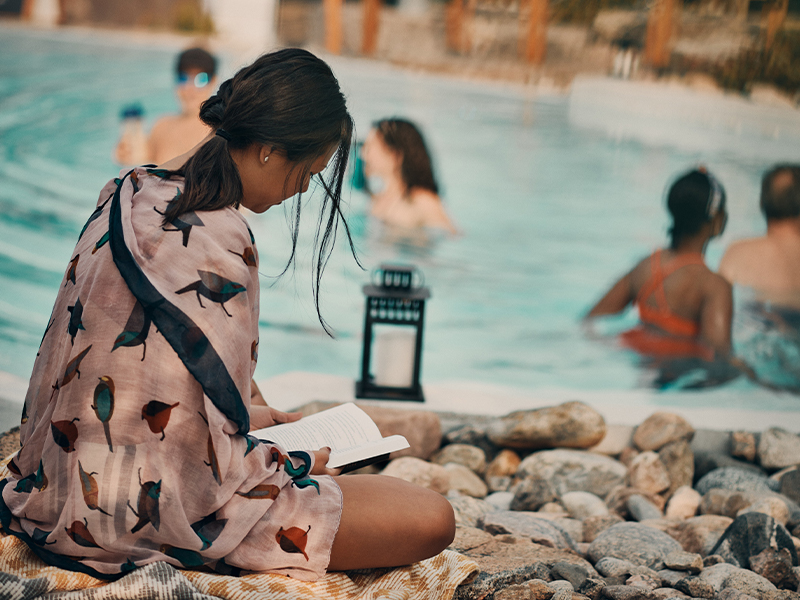 Last week, we asked our Instagram and Facebook followers what they read this summer. The sunny season may be coming to an end, but there are still a few warm and long days ahead! Whether you pack a book on a hike, read by the pool at the spa or always keep a novel on your bedside table, here is our community recommended end-of-summer reading list:

The Comfort Book by Matt Haig

This comforting collection of notes, lists and stories is a beacon of light to keep in one’s back pocket for gray days. “The best thing about rock bottom is the rock part. You discover the solid bit of you. The bit that can’t be broken down further. The thing that you might sentimentally call a soul. At our lowest, we find the solid ground of our foundation. And we can build ourselves anew.”

Born a Crime: Stories From a South African Childhood by Trevor Noah

“Trevor Noah’s unlikely path from apartheid South Africa to the desk of The Daily Show began with a criminal act: his birth. Trevor was born to a white Swiss father and a black Xhosa mother at a time when such a union was punishable by five years in prison. Living proof of his parents’ indiscretion, Trevor was kept mostly indoors for the earliest years of his life, bound by the extreme and often absurd measures his mother took to hide him from a government that could, at any moment, steal him away. Finally liberated by the end of South Africa’s tyrannical white rule, Trevor and his mother set forth on a grand adventure, living openly and freely and embracing the opportunities won by a centuries-long struggle.”

An audio version of this book is also available! Stories truly come to life when Trevor Noah himself tells them.

The Rose Code by Kate Quinn

Kate Quinn masters the art of historical fiction and mystery time and time again. “As England prepares to fight the Nazis, three very different women answer the call to mysterious country estate Bletchley Park, where the best minds in Britain train to break German military codes. Vivacious debutante Osla is the girl who has everything—beauty, wealth, and the dashing Prince Philip of Greece sending her roses—but she burns to prove herself as more than a society girl, and puts her fluent German to use as a translator of decoded enemy secrets. Imperious self-made Mab, product of east-end London poverty, works the legendary codebreaking machines as she conceals old wounds and looks for a socially advantageous husband. Both Osla and Mab are quick to see the potential in local village spinster Beth, whose shyness conceals a brilliant facility with puzzles, and soon Beth spreads her wings as one of the Park’s few female cryptanalysts. But war, loss, and the impossible pressure of secrecy will tear the three apart.

As the royal wedding of Princess Elizabeth and Prince Philip whips post-war Britain into a fever, three friends-turned-enemies are reunited by a mysterious encrypted letter–the key to which lies buried in the long-ago betrayal that destroyed their friendship and left one of them confined to an asylum. A mysterious traitor has emerged from the shadows of their Bletchley Park past, and now Osla, Mab, and Beth must resurrect their old alliance and crack one last code together. But each petal they remove from the rose code brings danger–and their true enemy–closer…”

The Blue by Lucy Clarke

What happens when the perfect yacht getaway goes from dream to chilling nightmare? This spine-tingling mystery will keep you on the edge of your seat.

“Lana and her best friend Kitty leave home looking for freedom—and that’s exactly what they find when they are invited onto The Blue, a fifty-foot yacht making its way from the Philippines to New Zealand. The crew is made up of a group of young travellers bitten by wanderlust, and it doesn’t take long for Lana and Kitty’s dream of sea-bound romance to turn into reality.

Both women fall under the hypnotic spell of The Blue, spending their days exploring remote islands and their rum-filled nights relaxing on deck beneath the stars. But when one of their friends disappears overboard after an argument with another crewmember, the dark secrets that brought each of them aboard start to unravel.

At turns gorgeously scenic and entirely haunting, The Blue is a page-turning thriller about friendship, freedom and wanting to leave the past behind.”

A beachy romance book is the perfect companion for a day of reading by the pool and Beach Read checks all the boxes!

“A romance writer who no longer believes in love and a literary writer stuck in a rut engage in a summer-long challenge that may just upend everything they believe about happily ever afters.

Augustus Everett is an acclaimed author of literary fiction. January Andrews writes bestselling romance. When she pens a happily ever after, he kills off his entire cast.

In fact, the only thing they have in common is that for the next three months, they’re living in neighboring beach houses, broke, and bogged down with writer’s block.

Until, one hazy evening, one thing leads to another and they strike a deal designed to force them out of their creative ruts: Augustus will spend the summer writing something happy, and January will pen the next Great American Novel. She’ll take him on field trips worthy of any rom-com montage, and he’ll take her to interview surviving members of a backwoods death cult (obviously). Everyone will finish a book and no one will fall in love. Really.”

Behind the Scenes: Top 5 Plants in Our Corporate Office
What is Forest Bathing?